The Gentleman's Guide to Vice and Virtue by Mackenzi Lee 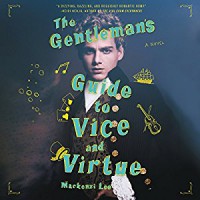 It might be impossible for me to completely sum up why I love this book so much, but I will definitely try. I think this was one of my most anticipated releases this year and there was so much hype surrounding it. I'm so glad it lived up to the hype.

This book really shines with the characters. From the very beginning I fell in love with Monty, Percy, and Felicity, all for different reasons. Monty is hilarious and snarky in a way that makes me die laughing. His struggle with self worth and coming to realize he is worth something was done so well. Percy is sweet and I love how he deals with his illness. I feel like most books don't take the stance that Percy has with illnesses and I loved it because it just seemed so much more realistic. Felicity is the gem of this book, she's one of the only female characters and she's badass. I loved the group dynamic throughout the book because it was so realistic. I can't get enough of the three of them.

The romance made my heart melt. I love Monty and Percy's relationship as friends and I really enjoyed seeing it develop into more than that. Even though the book starts out with Monty's feelings already there, it doesn't feel like fake feelings or a forced romance. It's sweet, but they also have issues that they have to work through. There's tension, but it's not because of their sexuality, even though that would have been a problem during their time.

The plot was very interesting to me and ties in really well with Percy's illness and Monty's desire to cure him, even though he doesn't necessarily want that. Their adventure was never boring because after one thing happened, something else was already lined up. It was a fast paced read, so the 500 pages didn't feel that long at all. I actually wanted more because I just loved the story so much.

I can't say enough good things about this book. I'm so excited for the sequel that's supposed to be narrated by Felicity. I have a feeling that one is going to be even better.